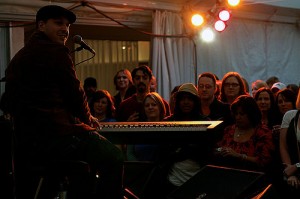 On the 19th of July 2013 Gavin DeGraw, The Script and Train will be seen at the Klipsch Music Center. The trio will be performing live at in Noblesville, Indiana in front of the gathered fans. This is a moment for the fans to rejoice as they will be treated to three concerts at the price of just one as the three singers hit the roads with their hit singles and other numbers from their chart-topping albums. The trio have performed together in the past as well and have the reputation of performing in a sold out venue.